"The Secret Weapon of a Battle Maiden!" - Nobuhiro Watsuki

The Valkyrie Skirt takes the form of four scythe-like blades that are attached to four separate mechanical arm-like manipulators. They are linked to cuff-like objects that go around Tokiko's thighs with 2 manipulators being linked to each thigh. There are also have four hexagon shapes on each blade.

Manipulators: Tokiko uses the manipulators to make well-calculated, high-speed movements with the blades. It detects nerve impulses in the body so the manipulators can be controlled directly by thought. That is why Tokiko often has it attached onto her bare skin. She is capable of using them a number of ways, from attacking numerous enemies at once to using them to boost her jumps and cushion her landings. She has also used them to traverse difficult terrain and even skate across walls and ceilings.

Standby Mode: When Tokiko isn't using the Valkyrie Skirt in between battles, the blades of her Buso Renkin fold up and shrink to resemble miniature wings. She does this as to save time from reactivating it. Along with her school outfit, this makes the skirt resemble that of a Valkyrie, hence the name Valkyrie Skirt. 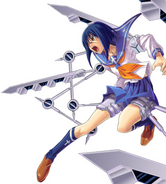 Standby mode lineart
Add a photo to this gallery
Retrieved from "https://busorenkin.fandom.com/wiki/Valkyrie_Skirt?oldid=7217"
Community content is available under CC-BY-SA unless otherwise noted.